The benefits of vertical gardens on human health

The benefits of vertical gardens on human health

Vertical gardens are still newcomers in landscape architecture where the primary use is for the creation of new green space in cities where available space is scarce. Vertical gardens are known for their aesthetic value, their creation of ecosystems and their positive influence on biodiversity, micro-climates and building heat efficiency. They also have a profound positive impact on air quality, especially in regard to humidity and dust content, both indoors and outdoors. But do plants really matter?

The cumulative body of evidence from over a decade of research on the people-nature relationship provides an unequivocal answer: contact with vegetation, in a variety of circumstances, is highly beneficial to human health and well being.

A Norwegian study from 1995-96 on the effects of indoor plants on health and discomfort symptoms provides the best evidence for the health benefits of plants. The research team studied 60 office workers whom each experienced a
plant and no plant condition. In the first year of the study, half of the subjects had a planter installed on their window sill and a large floor plant near their desks, while the other subjects experienced their standard office conditions without plants. The results showed that:

The researchers suggest that health improvements were likely due to two
mechanisms: improved air quality and the psychological value of being in a more pleasing environment.

Whether contact with vegetation is active (gardening) or passive (viewing vegetation through a window), results show a consistent pattern of effects that are diminished when plants are absent. Research, summarized in Biophilic Design: The Theory, Science and Practice of Bringing Buildings to Life (Kellert, Heewagen and Mador,2003) shows that people in spaces with vegetation compared to those lacking vegetation are more likely to experience the following outcomes:

Ulrich (1984) found that patients recovering from surgery, with views of a garden, got home nearly two days earlier than those who looked onto a wall or lift-well. Patients also used lower levels of painkillers. 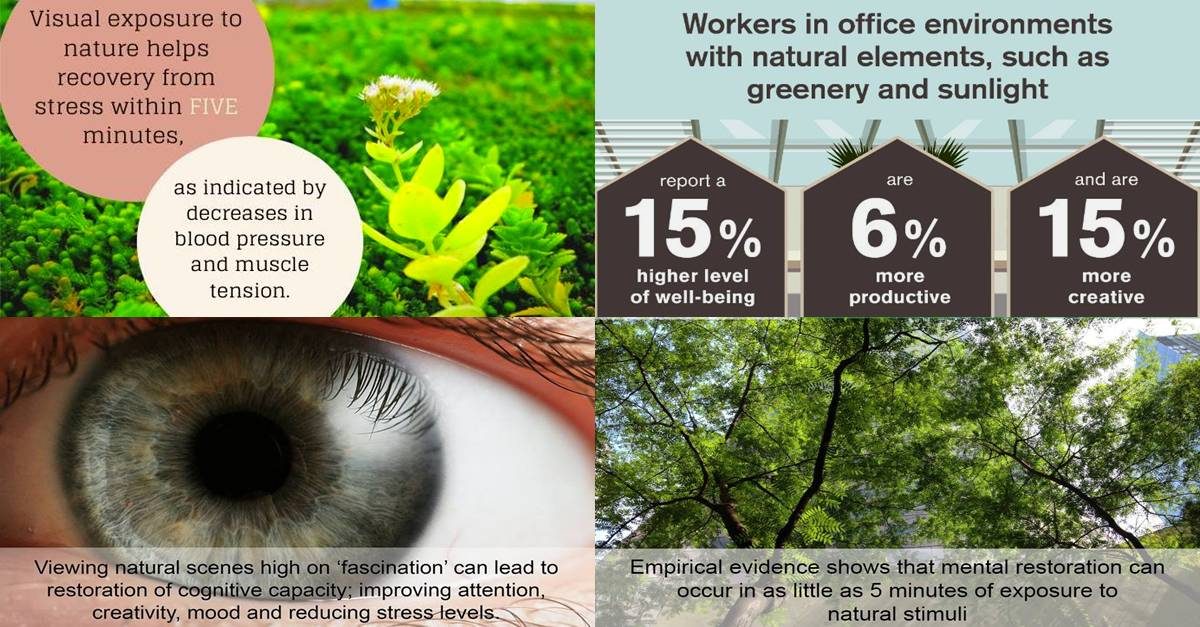 Other studies have also found that plants can positively influence air quality. For instance, a 1989 study assessed the use of plants to remove formaldehyde and zylene from the air in test chamber studies. This research was prompted by an EPA study that found high levels of these chemicals in newly constructed office buildings in the 1990’s. The chemicals are commonly found in building materials and furnishings. The researchers found that plants were effective in continuously removing the chemicals from the air in the test chambers. Both the plant leaves and the microorganisms in the soil contributed to the improved air quality. Findings indicated that it was normal microorganisms of the potting mix that were the primary volatile organic compound (VOC) removal agents. The role of the plants here is in nourishing the root-zone microbial communities. This ‘symbiotic microcosm’ relationship is a universal feature of plant-and-soil interactions.

A more recent study in 2004, found that plants removed airborne doses of benzene within 24 hours. Both the leaves and soil microorganisms proved effective in removal of the chemical from the air. The authors concluded that “the findings demonstrate the capacity of the potted plant microcosm to contribute to cleaner indoor air and to lay the foundation for the development of the plant system as a complementary bio-filtration system.”

Beyond the direct benefits for our health, living walls have multiple impacts on cities and citizens; they protect buildings from the effects of  natural elements; they are introducing more gardens in urban areas and they can even be used to grow vegetables! Under sun exposure, a bare wall will contribute to heat conduction inside the building, making the internal building temperature rise, and contributing to the urban ‘heat island’ effect. But green walls, where the leaves of plants lose water through evapo-transpiration, lower the surrounding air and building temperatures. Green walls also depress the cities temperature–they create a micro-climate.

The Tokyo Institute of Technology proved that green walls lower the energy loss of buildings. They also prevent the creation of urban dust (partly due to the effect of wind over buildings) and absorb heavy metal particulates from the atmosphere. In Canada, where winters are very long,  green walls are placed inside buildings to help offset SAD (Seasonal Affective Disorder).

Australian studies on the benefits of greening up urban areas  claim:

The Auckland Council estimates the social cost from air pollution in the city to be $1.07 billion while studies show that in city streets bounded by buildings, careful placement of plants can reduce concentrations of nitrogen dioxide by up to 40 percent and of microscopic particulate matter by up to 60 percent.

Whichever way you look at them, plants and living walls are good for us and good for the environment!

Get updates on our latest news, products and promotions?